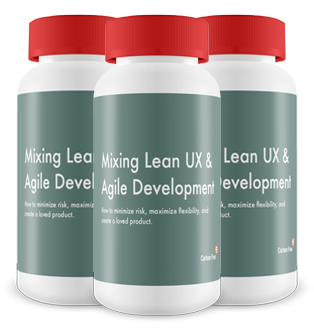 It was really magic sauce for those like me who have struggled to get design integrated an Agile development workflow.

To understand why this preso is so significant, consider: Agile adoption for software developers has been prevalent for a number of years now – but standard methods for integrating a design workflow into Agile have been trailing.

A common approach seems to be contained in a May 2007 whitepaper by Autodesk’s Desiree Sy, which suggests a staggered workflow with designers and developers on separate tracks:

I grant that this type of workflow could work, and probably beats the traditional waterfall by a longshot. But in having been participant in this sort of structure in previous workgroups, I can report it feels in need of improvement. Designers were not pairing with developers due to this structure and cultural walls went up. Two weeks sprint cycles became de facto one month sprints, pushing risk up. The separation of design was often derided as “tossing over the fence” — and is in practice a mini-waterfall: the exact thing we were trying to evolve from by adopting Agile.

The issue has been debated on stackoverflow, with the top response proposing the staggered workflow of the whitepaper. This earned the rejoinder:

I strongly disagree with the answer provided by Jason. The whole point of Scrum is to get rid of the method where designers first “do their thing” and then go on to other stuff. That’s completely and 100% against all lean / Scrum principles!

Well then how else could you structure your workflow?

The whole deck is worth a review — do yourself a favor and take 10 minutes to at least glance through it right now.

And though it may not be magic, it might be a tonic: Don’t toss over the fence. A primary takeaway is the stepping away from a traditional design team and pixel-perfect design up front, and relying on more communicative, integrated, cross-functional teams.

Also mentioned in the talk but not in the deck

Some questions I didn’t have the opportunity to ask

In any case, I’m intrigued by the continued innovation and creativity of Carbon 5 and to have more of a conversation with leaders in the LeanUX-Agile community in SF.

What should you do now?